Authored by: The Government of the United Kingdom and the International Energy Agency 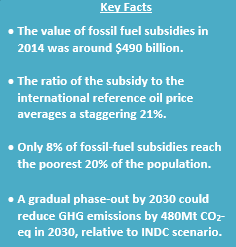 The IEA estimates the value of global subsidies to fossil fuels to be around $490 billion in 2014[i], with oil subsidies accounting for more than half of the total. This translates into, on average, a subsidy rate of 21%, meaning that consumers paid roughly only 79% of international market prices for fossil fuel products.

The main objective of fossil fuel subsidies is usually to hold down the cost of energy for poor households or to redistribute national resource wealth. In practice, however, IEA analysis indicates, that only 8% of the money spent on fossil-fuel subsidies reaches the poorest 20% of the population[ii]. The impact of this inefficiency is compounded by the fact that the fiscal burden of inefficient fossil fuel subsidies weighs heavily on some precariously placed economies, and in some developing countries squeezes the resources available for education and health.

Reforms to fossil fuel subsidies also have the potential to make a significant contribution to the reduction of green-house gas (GHG) emissions. IEA analysis shows that a gradual phase-out by 2030 could reduce GHG emissions by 480Mt CO2-eq in 2030 relative to INDC scenario where the impact of intended nationally determined contributions submitted by countries is assessed.

Furthermore, fossil fuel subsidies incentivise wasteful use of energy, hinder investments in low-carbon technologies, energy-efficient equipment and decreases responsiveness of demand to price. Fossil-fuel subsidies can cause financial losses to energy suppliers as a consequence of under-pricing of energy commodities that could result in under-investment in energy supply. Therefore, reforms to phase out fossil fuel subsidies will provide greater scope to attract investment for energy infrastructure, as well as provide consumers with incentives to save energy and aid the commercialization of renewable energy and other clean technologies.

Global leadership for a global issue

Various other international efforts, both on a multilateral and bilateral basis, have been made to drive the reform of fossil fuel subsidies. Alongside the IEA, which publishes analysis on FFSR in their World Energy Outlook every year, other international institutions have also undertaken analysis supporting FFSR. The UK, along with other pro-reform countries, has looked to support energy pricing and subsidy reforms in countries across the world through its bilateral assistance. Other global initiatives such as Friends of Fossil Fuel Subsidy Reform have also played a significant role to build up the momentum for reform.

Figure 1 illustrates that globally, fossil fuel subsidies fell slightly in 2013 and 2014, after experiencing continuous increases from 2009, in line with international energy prices but also as a result of policy reforms in a number of countries, which offset higher consumption of subsidised fuels.

The IEA’s latest analysis reveals that while movements in world prices typically have the greatest impact on the total cost of fossil fuel subsidies from year-to-year, policy interventions have played an important role over time. In the absence of reforms that have been taken place since 2009, the value of global fossil fuel subsidies would have been $117 billion, or 24%, higher in 2014 at $610 billion, as illustrated in Figure 2. 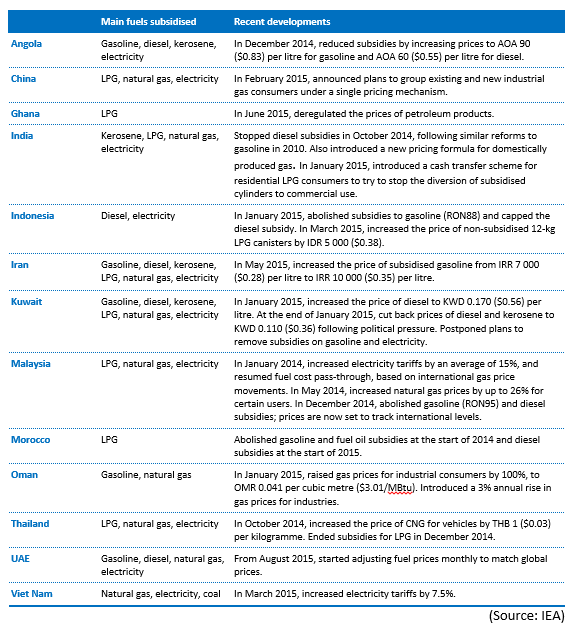 Despite their economic, social and environmental costs, fossil fuels subsidies are stubbornly persistent and governments face difficult challenges in reforming them. For this reason the UK, along with others, have continued to call for further international cooperation to better understand FFSR issues, share best practices and effect more urgent action to realise the many benefits that fossil fuel subsidy could bring.

The plunge in oil prices since mid-2014 could add further momentum to the phase-out of consumer fossil fuel subsidies, by reducing the gap between market and subsidised prices and so making withdrawal of subsidies less politically controversial. Indeed several countries, including India, Indonesia and Malaysia, have already seized the opportunity. It has also put direct pressure on government budgets of major oil and gas exporting countries, and exporters like Angola have made reforms. However, it should be acknowledged that by reducing the cost of subsidising energy consumption, lower international prices could also reduce the budgetary urgency for oil and gas importing countries to take action. Efforts to encourage reforms need to continue even through periods favourable for reform.

Equally as important as urgent action is ensuring the durability of such reforms. While acknowledging that national circumstances and changing market conditions mean that there is no single path to follow when reforming fossil fuel subsidies, the IEA set out 4 common elements to successful subsidy reform, which if applied can improve the possibility of long term success, as summarized in Figure 3: 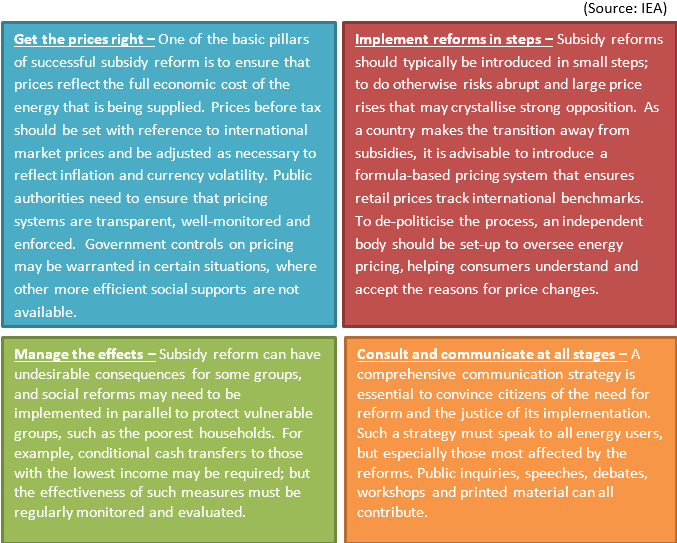 Phasing-out fossil-fuel subsidies represents a triple-win situation. It would enhance energy security, reduce emissions of greenhouse gases and bring improved fiscal space for governments. This should provide nations an incentive to make subsidy reform a key policy within wider and more comprehensive strategies to achieve sustainable development and to combat climate change. Strong progress has been made, but much still remains to be done and further global action towards successful implementation of the reforms is needed.

[i] World Energy Outlook (IEA, 2015). The IEA estimates cover subsidies to fossil fuels consumed by end-users (households, industries and businesses) and subsidies to the consumption of electricity generated by fossil fuels.